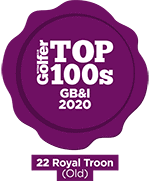 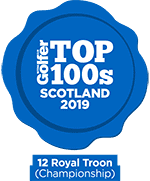 Royal Troon is a course of extremes and contrasts. It famously possesses the longest and shortest holes on the Open rota, at 123 and 601 yards respectively. At 123 yards, the Postage Stamp is as cute as they come. In an age when Championship par threes are often twice the length, it is a reminder that subtlety of design is more effective an antidote to modern equipment than building a new tee to make a hole 30 yards longer.

Troon occupies a narrow stretch of land. It is hemmed between by the Irish Sea and the ubiquitous links-bordering railway line. The front nine, with the exception of the 8th, broadly travels away from the clubhouse, while all but one hole on the back nine goes in the opposite direction.

Tam Arte Quam Marte – as much by skill as by strength – is the club’s motto. Take due note. Winners here have had to seduce rather than overpower this vintage links, and visitors will have to try their hardest to do the same.